DISCUSSION MEMO
29 May 2018
From a Logistics Hub to the European Intervention Initiative: How can Germany and France support each other’s priorities for European defence? 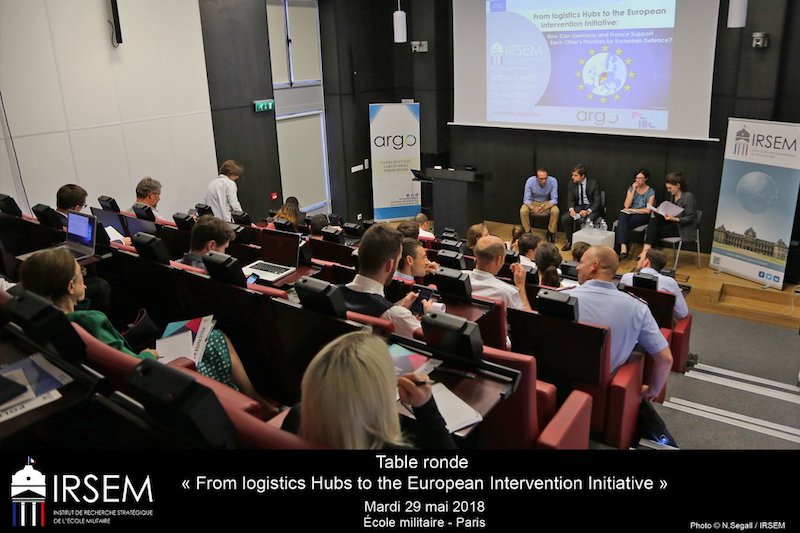 The first part of Allez l’Europe! // Vorwärts Europa! for the European security and defence program took place at l’Institut de recherche stratégique de l’Ecole Militaire (IRSEM) in Paris and revolved around three major topics. First, strategic autonomy was discussed. While the experts underlined the willingness to implement CSDP and PESCO, the difference in regard to the motives for cooperation and definitions of strategic autonomy were highlighted as substantial. Germany in this regard focuses on European integration and France on defence, according to one expert. Regarding common arms projects such as the Future Combat Air System (FCAS), it was stated that there is a joint willingness to develop it, but that questions remain unanswered on its future usage and export. One of the larger remaining issues is that Germany and France have very different export regimes, leaving it unclear which nations the project could one day be exported to. The experts agreed that Germany’s future actions on export regulation remain uncertain, but it seems more likely that Germany would have to compromise on its rather strict policies. The possibility to sell bilateral projects such as FCAS to other European member states was also viewed with scepticism, as especially Eastern European countries prefer US products due to the latter’s protection ensured via large arms deals.

The second topic focused on the chances of bringing together French and German priorities towards the development of a common strategy strategic culture. There was disagreement on whether Germany even has a strategy as regards defence at present. The experts agreed, however, that Germany is showing increasing ambition towards greater engagement in matters of defence. One discussant mentioned that this does not necessarily mean that Germany is converging towards France’s definition of defence. With regard to the European Intervention Initiative (EI2), it was stated that France had prepared this project before PESCO regained momentum and thus, it should not be viewed as something that stands in competition to the latter. Moreover, EI2 could be involved in PESCO via the contribution of a project, according to one expert, so the frameworks are compatible. The contribution that EI2 could bring in terms of generating a common strategic culture through exchange of military personnel should be seen as a valuable addition, also from the German perspective.

The third part of the discussion revolved around different threat perceptions and partners for European defence. The discussants noted that the US will remain a key partner in territorial defence, as PESCO and the current EU security architecture alone are insufficient to guarantee the security of Europe. Germany especially could do more to balance the different threat perceptions, according to one expert, given its historical position in the middle of Europe. This position offers it the unique ability to lead the discussion, alongside France, on what Europe’s future security architecture should be.

As next steps, the experts identified the need for a strategic debate amongst European partners and foresight scenarios from which the next most urgent inititatives should be derived. One discussant summarized the upcoming summits at the EU-level as bearing the potential to make the coming weeks a “summer of love in Brussels“ as regards issues of security and defence.

In cooperation with the Gemeinnützige Hertie-Stiftung, we will be continuing the discussion on the 23rd of June in Berlin with Dr. Sebastian Chávez-Wurm, Director Public Affairs Germany at Airbus Defence and Space, Colonel Roland Lieb, Head of the French Army Liaison Staff at the German Army Command and Charles Thépaut, diplomat at the French Embassy in Germany.