LOCAL SCENARIOS FOR A EUROPE OF TOMORROW

How do we want to live in the future? People will answer this question very differently depending on their life situation, country, and age. But opportunities for exchange are rare.

The “Future Cities” project aims to initiate a dialogue across Europe that encourages the general public to think about the future and to explore their own visions. For this purpose, two citizen theatre groups from Nuremberg (Germany) and Bagnolet (France) will each develop a performative city tour for the year 2030, with local scenarios and European visions. The city is a special place for this dialogue where different discourses meet, e. g. the climate crisis, sustainable mobility concepts, demographic change, or new models of living and working.

We want to encourage citizens to address these issues starting with their own surroundings. The constant exchange between the two groups allows them to look beyond city or country borders and to experience themselves as European protagonists of urban change. The artistic approach facilitates the exploration of visions and also hopes to open up an emotional space for the exchange of personal wishes and fears. Ultimately, the “Future Cities” project allows us to experience how the future can be shaped.

The project builds on existing cultural relations between Germany and France, but deliberately leaves the capital cities. People of different socio-cultural backgrounds should come together for a polyphonic exchange. The project thus links the worlds of arts, futurology, political education, and European cultural relations with the power and creativity of civil society.

Under the guidance of theater professionals, the two groups each develop their own city tour, which will allow them to discuss their visions in public. Polis180 takes part with input lectures to familiarize the participants with some of the most urgent questions about the future and to encourage a sustained engagement with them.

The project is based on a four-step model that combines analog and digital as well as national and international elements:

In June, the two theater groups met for the first time!

After getting to know each other, we talked about the ideas of Polis180 for the “Future Cities” project: create visions for a democratic and egalitarian future society, use the city as an exemplary place where challenges and opportunities meet, experience a sensual exchange about individual desires and fears, and dive into intergenerational, intersociocultural, and global visioning together.

This was followed by expert inputs: Alex Putzer (Sant’Anna School of Advanced Studies, Pisa, Italy) spoke about the concept of New Nature (“The Rights of Urban Nature”), followed by Dr Federico Cugurullo (Trinity College, Dublin, Ireland) and his research on Urban Artificial Intelligence (“Welcome to the City of the Future”).

The participants then came together in three collaborative sessions for developing:

We learned a lot and had great fun – thanks so much to everyone who participated! 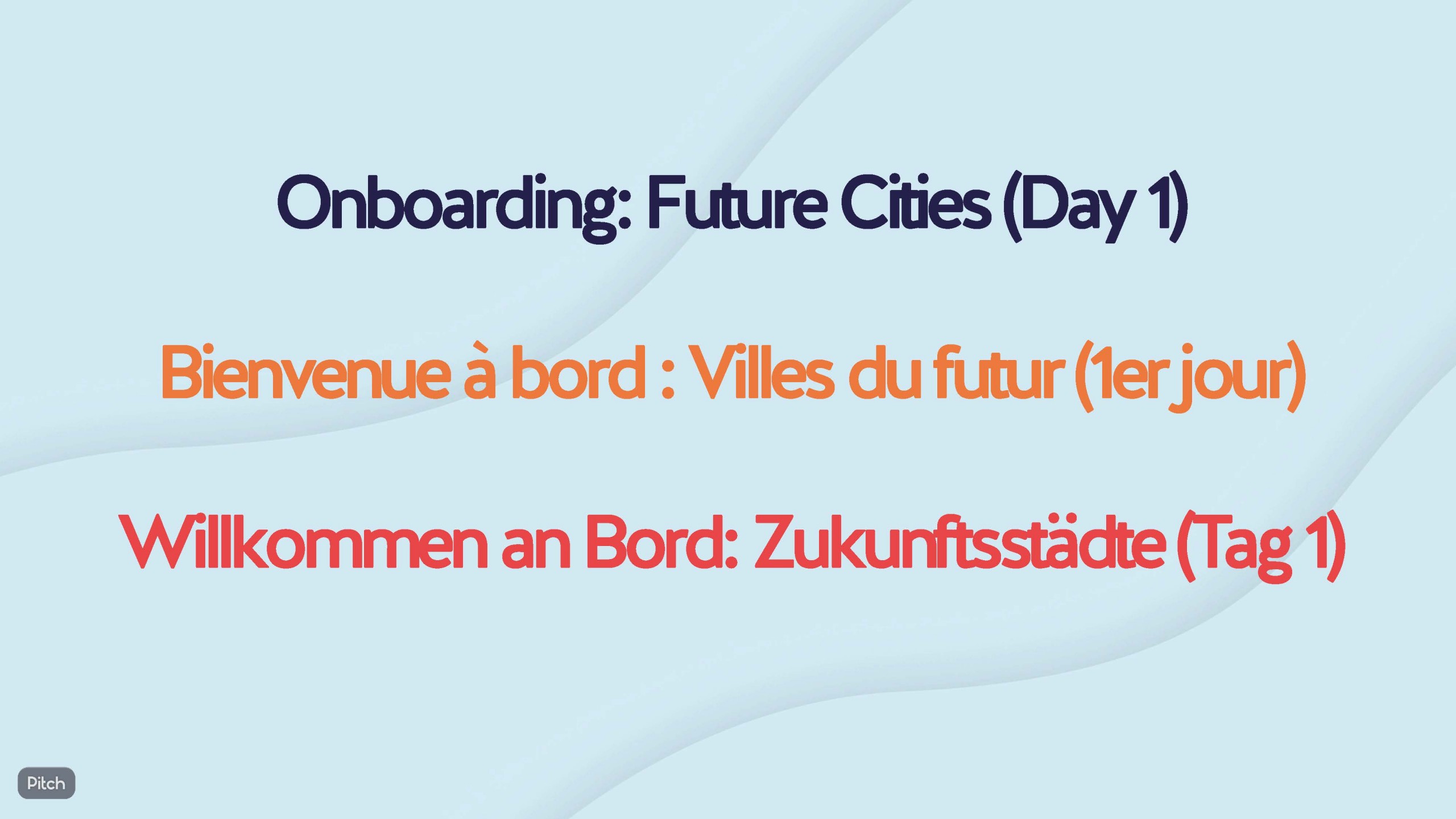 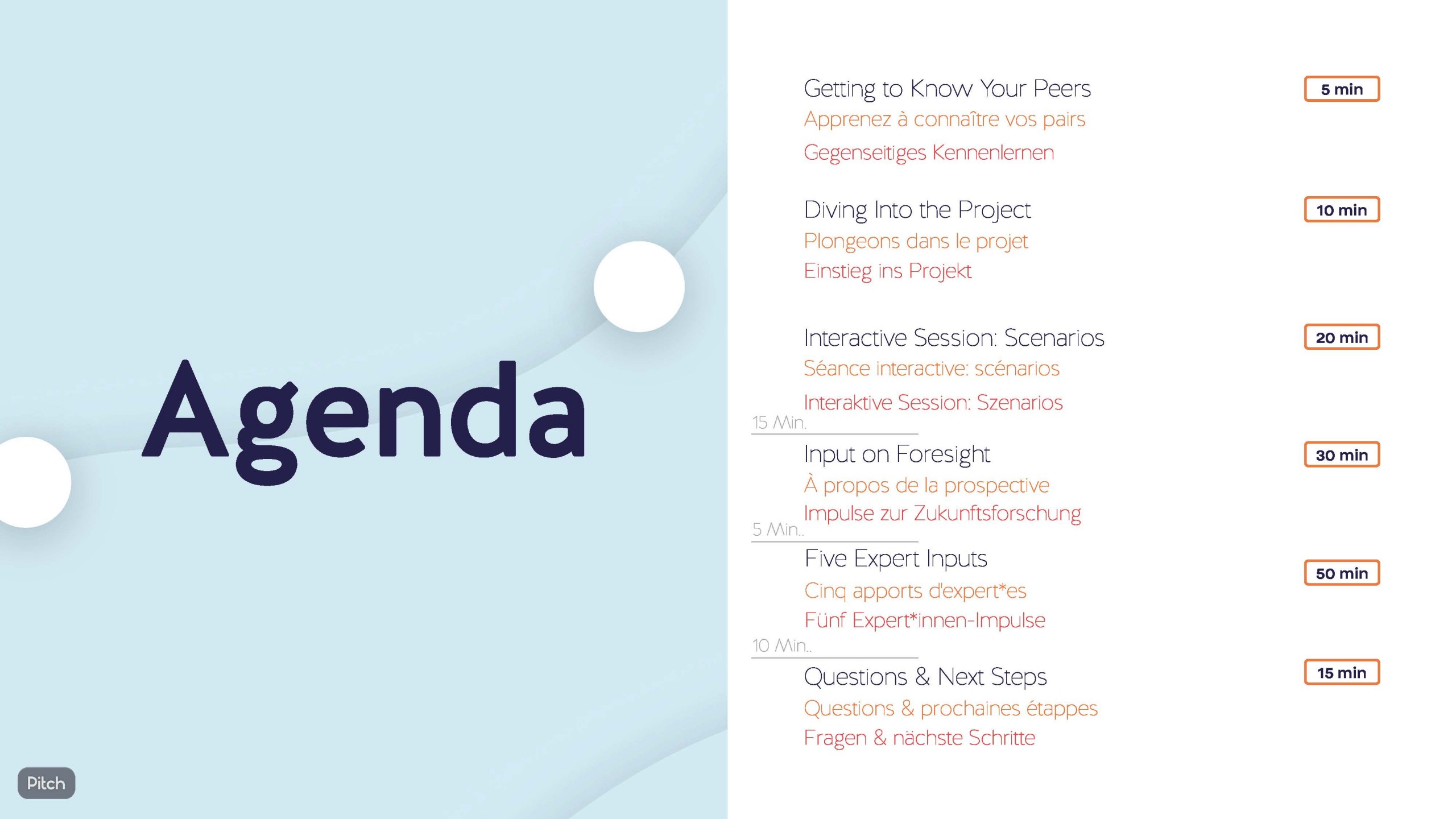 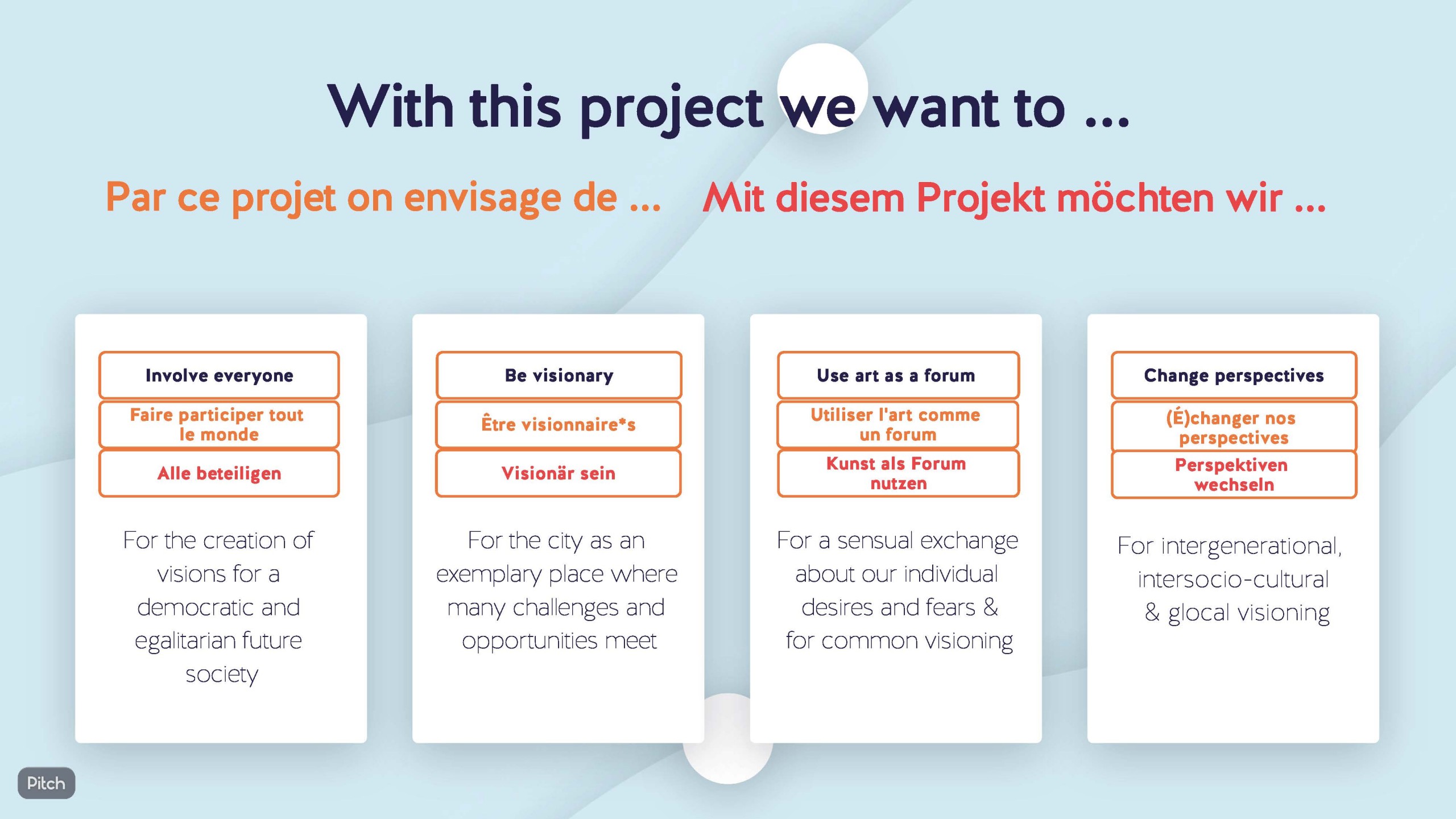 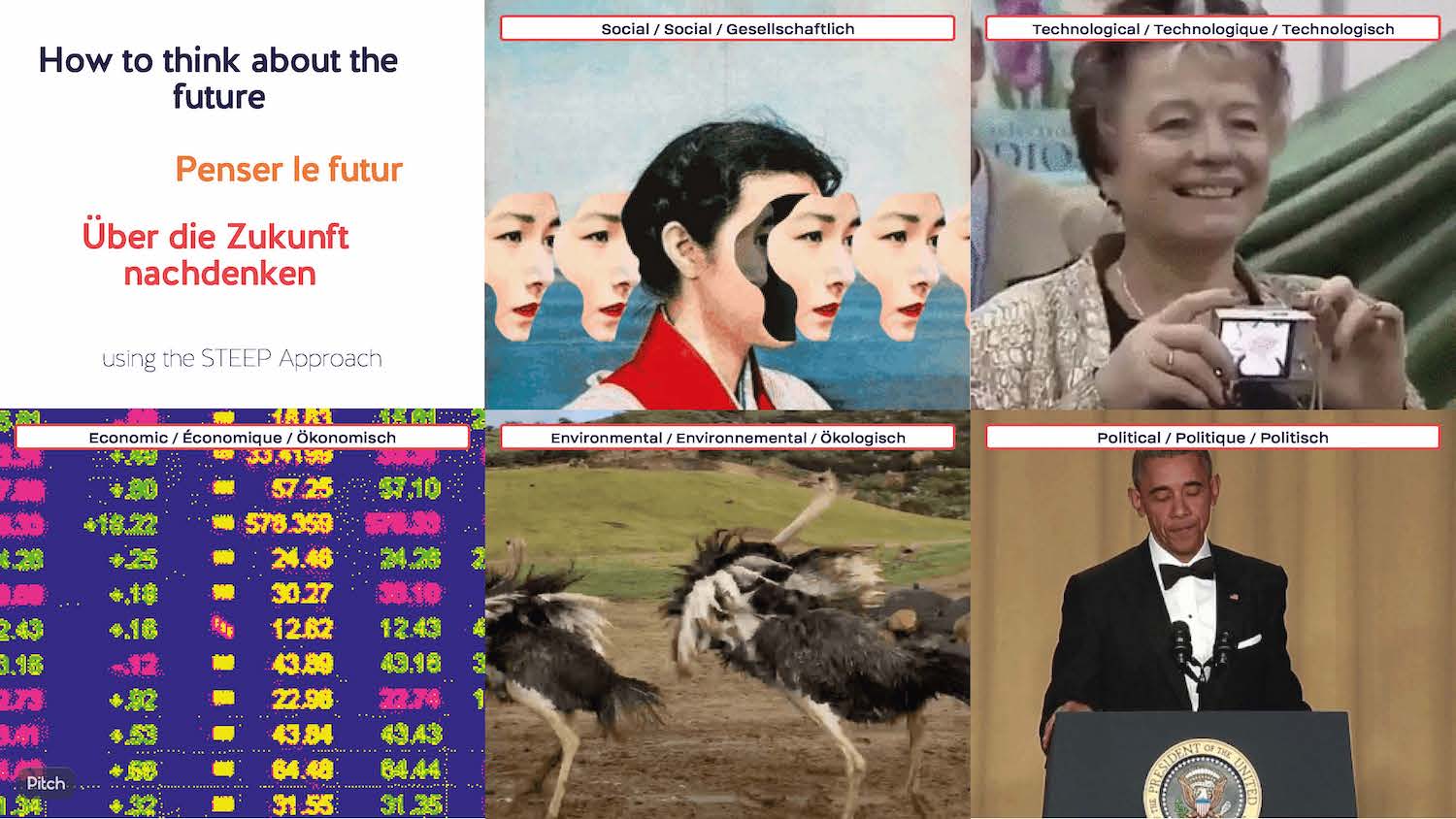 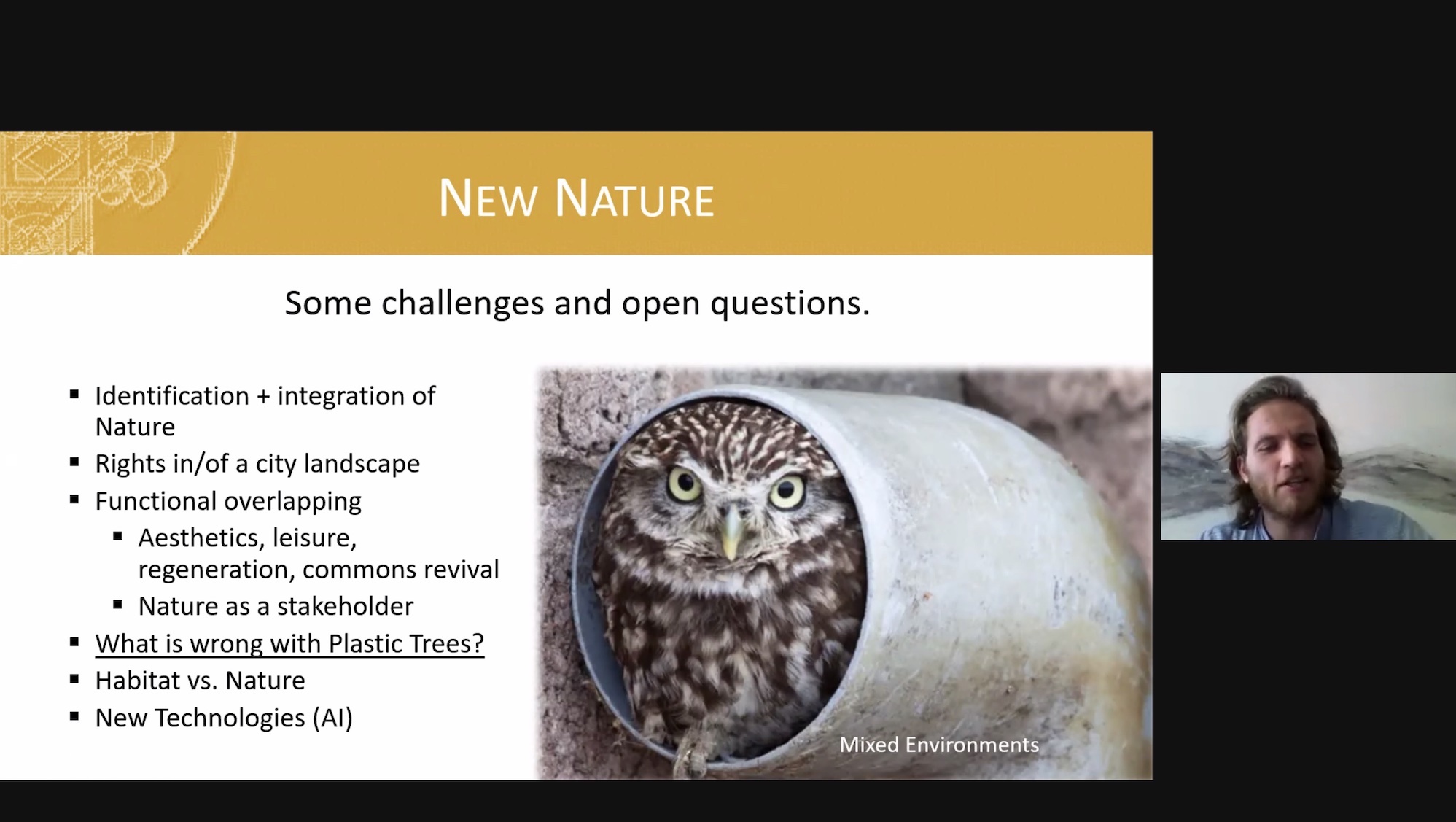 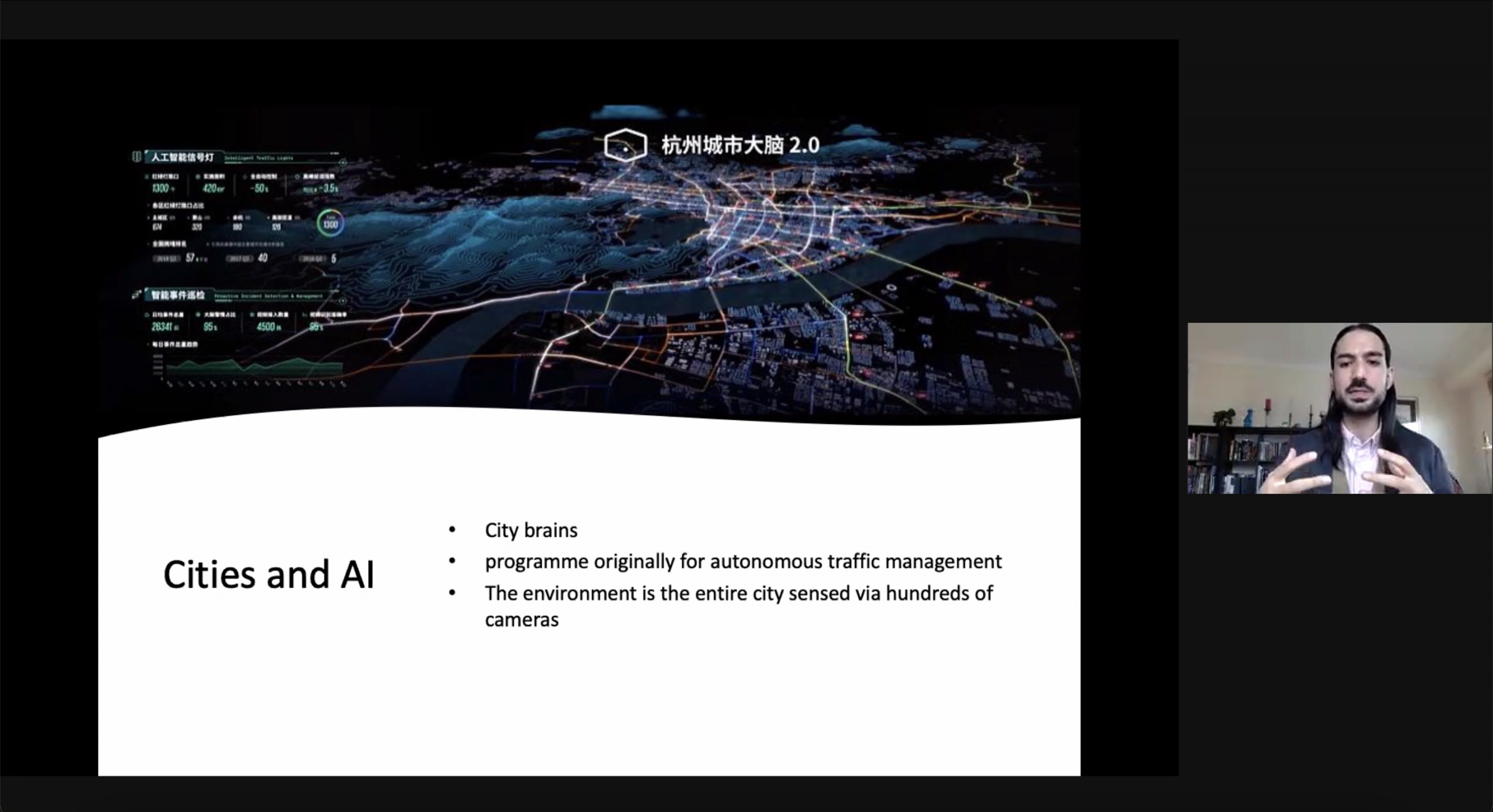 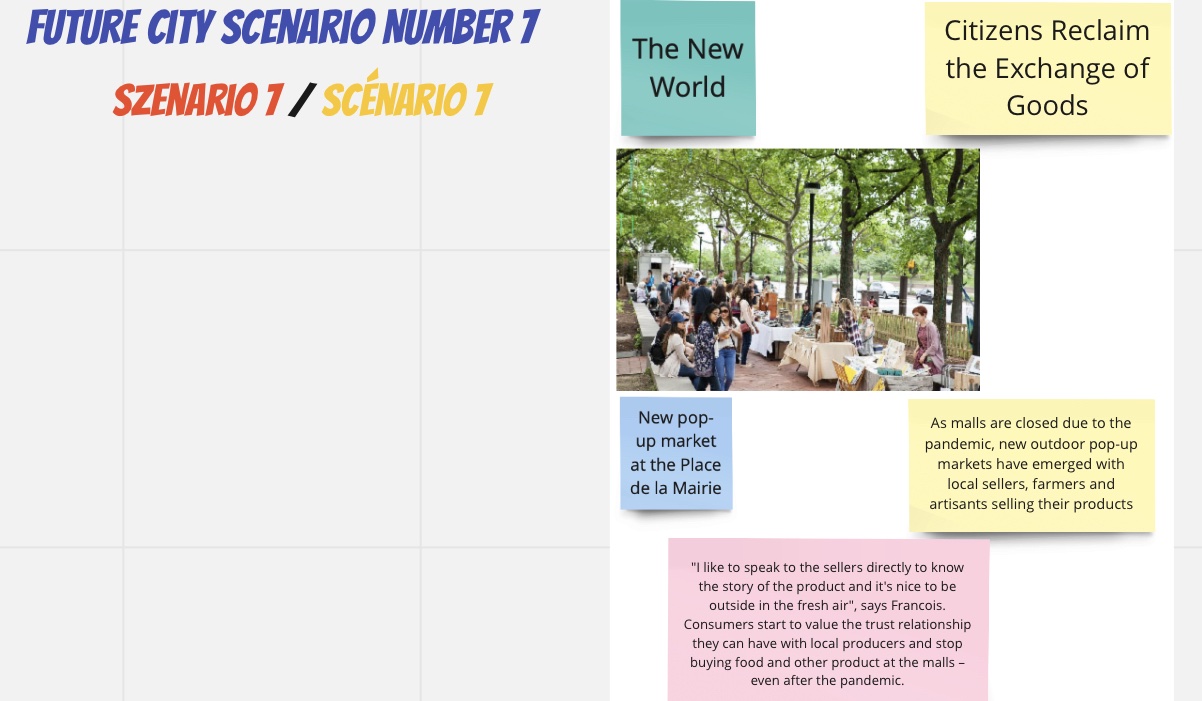 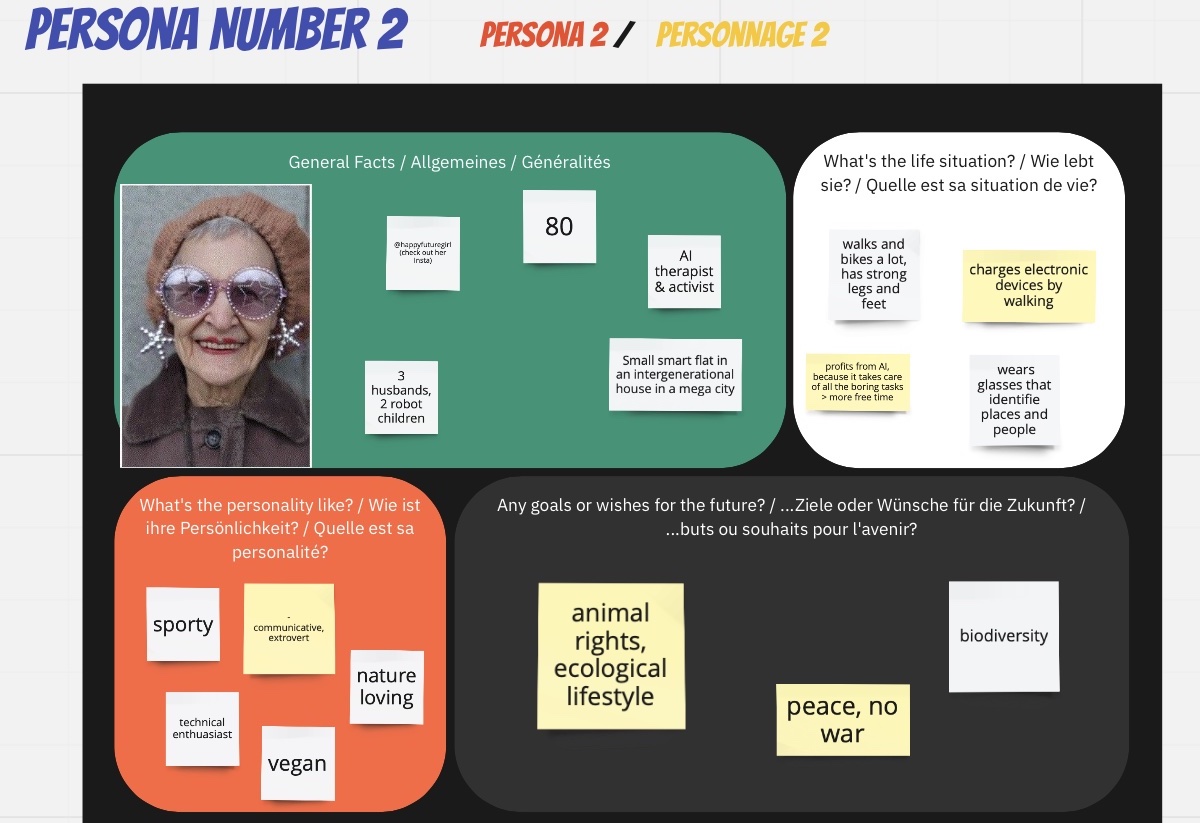 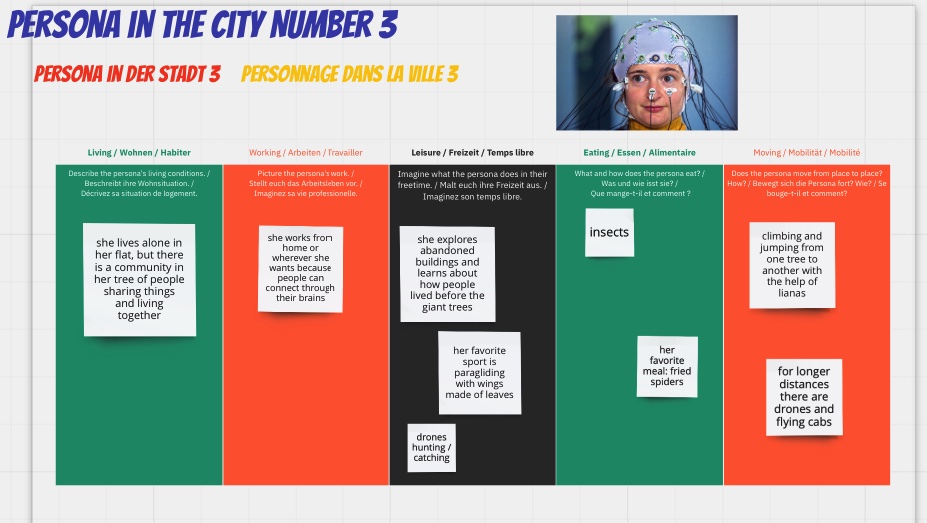 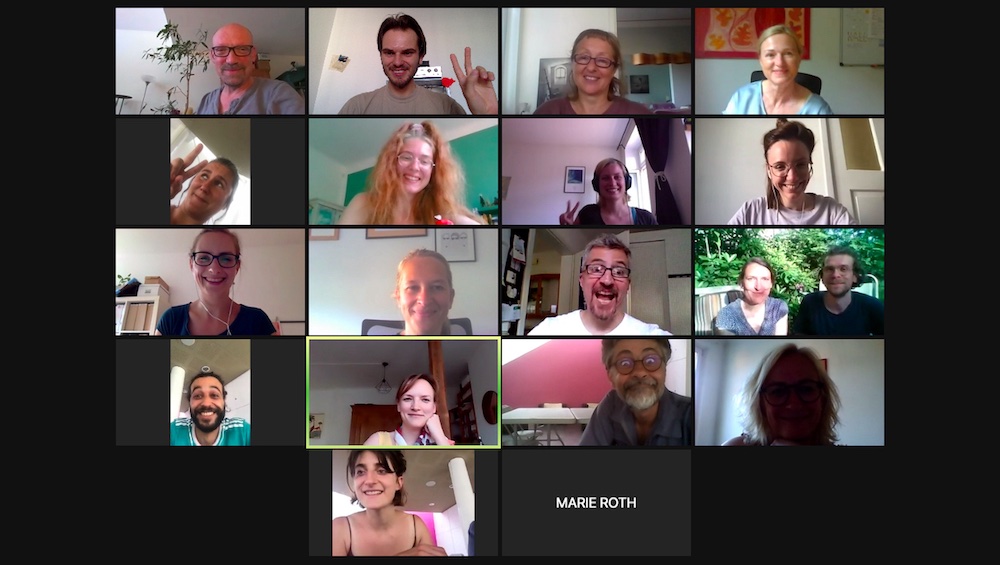 At the beginning of autumn, our city tours could finally take place!

On the first weekend of October, the French group of Collectif Sirènes invited to Parc Jean-Moulin in Bagnolet where they performed their spectacle Alice au Pays du Futur. 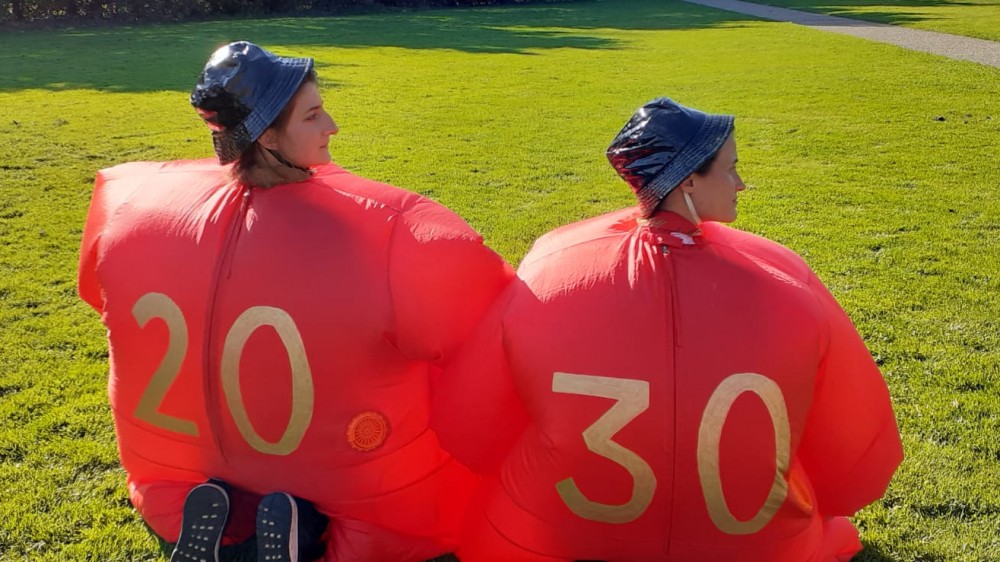 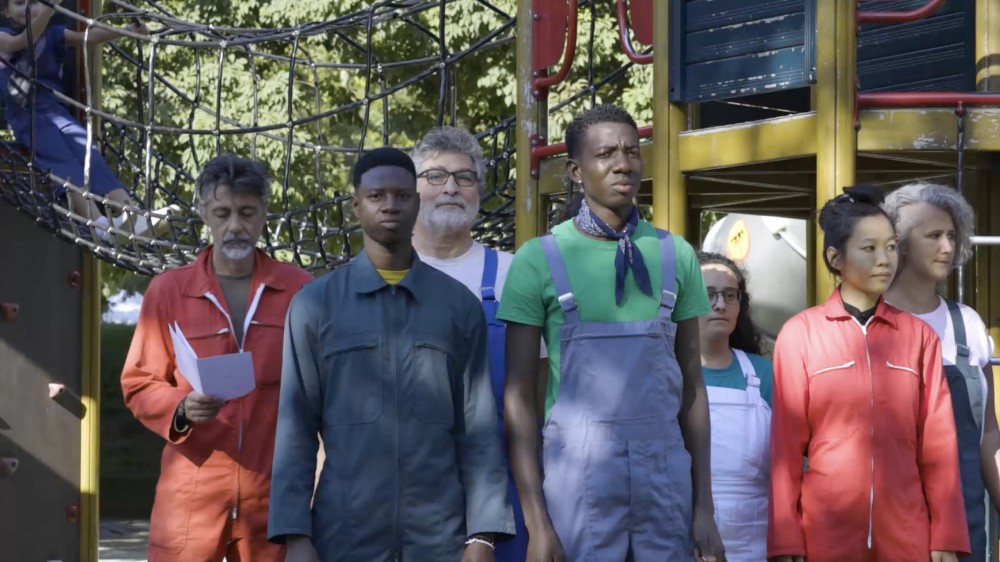 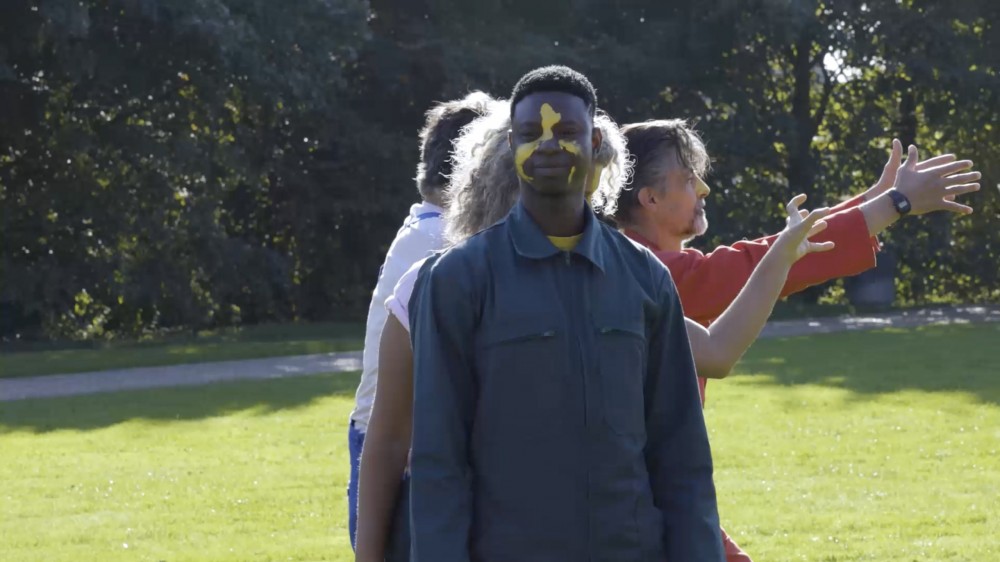 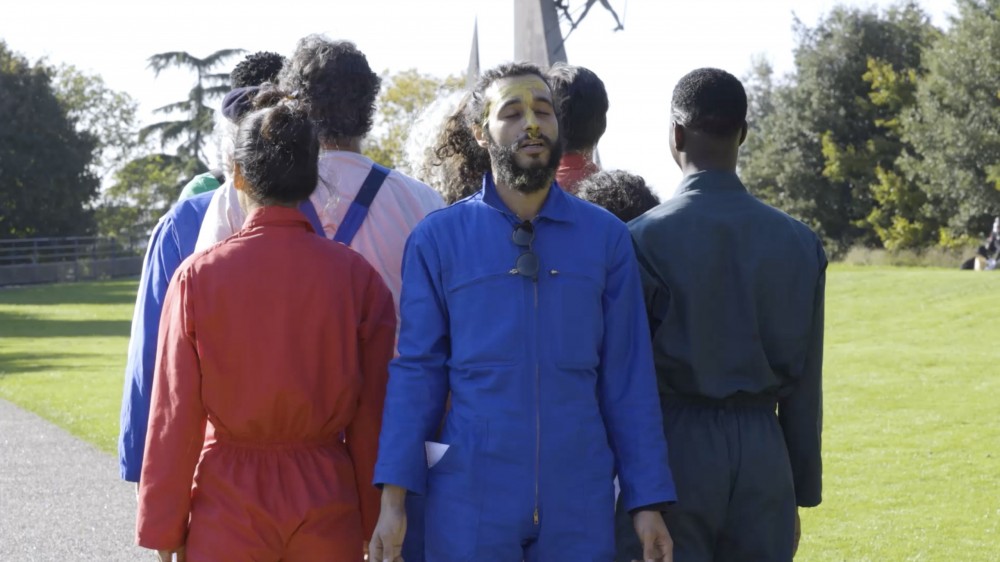 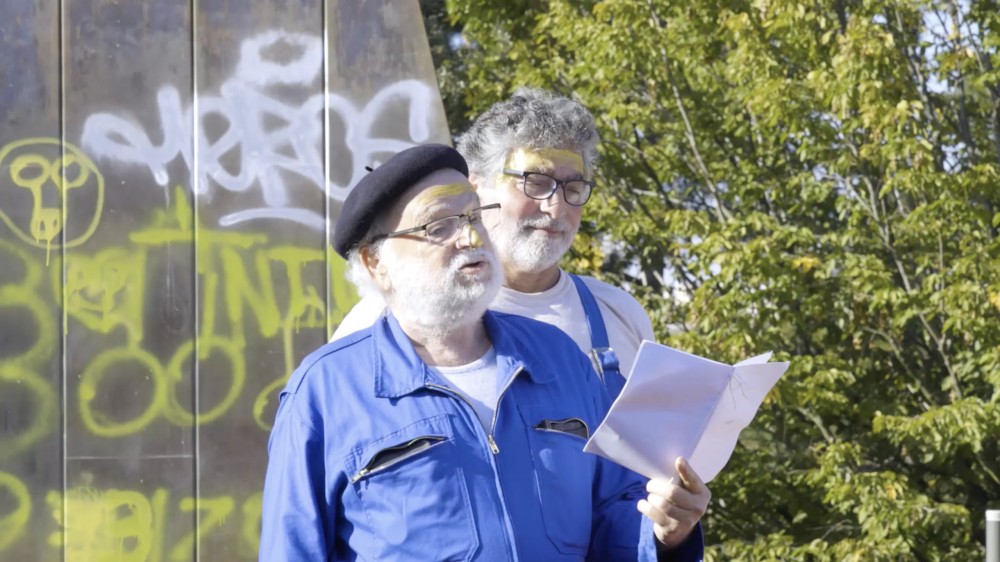 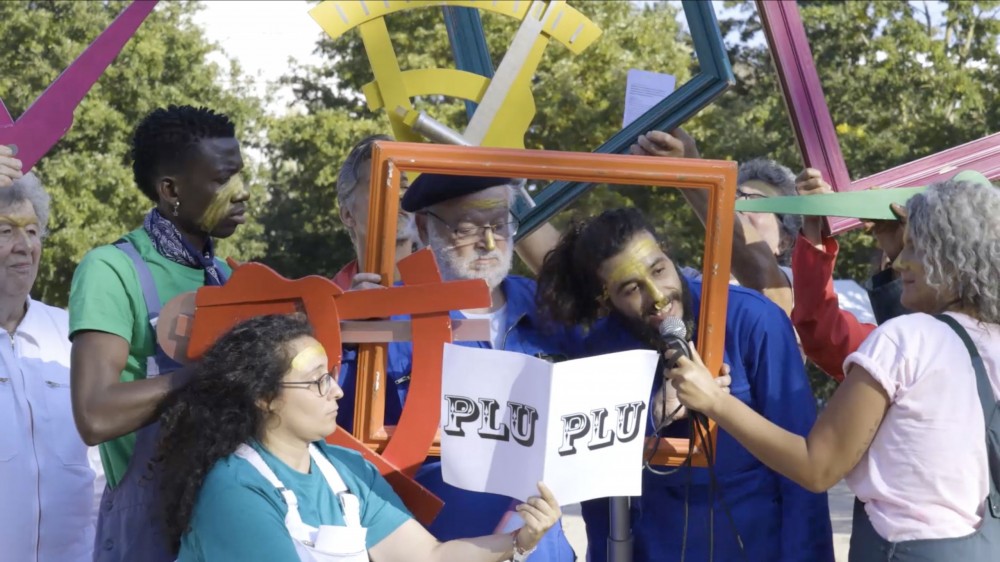 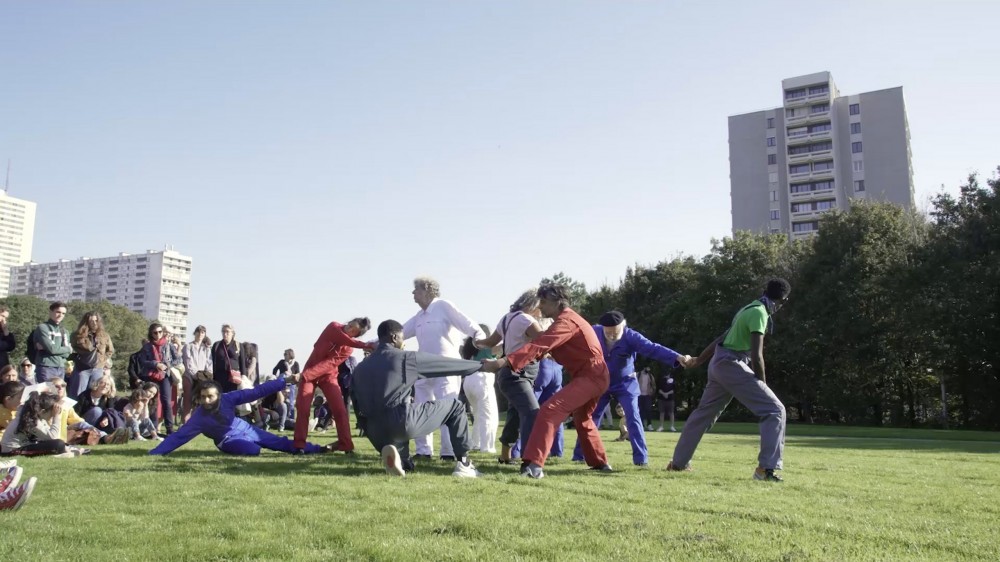 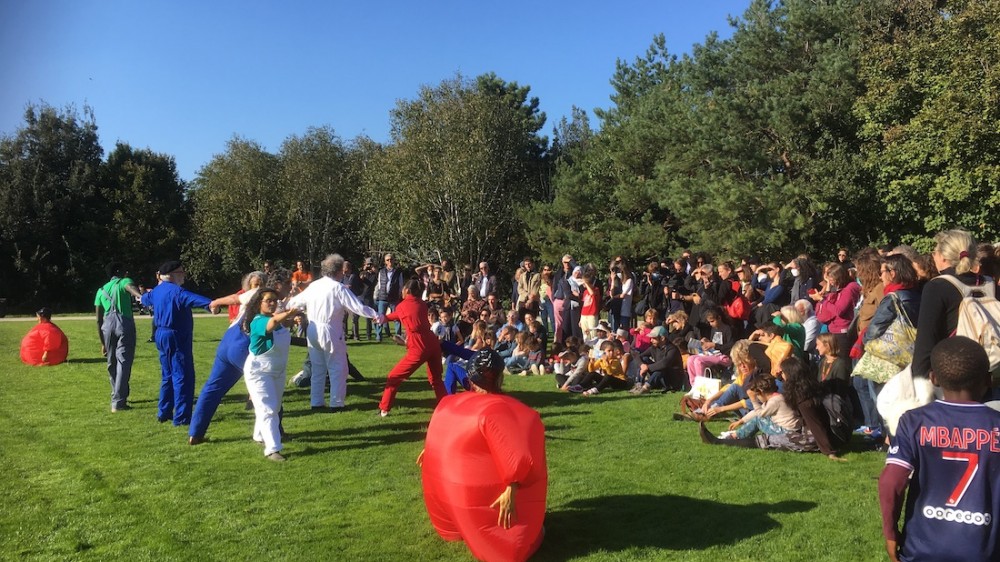 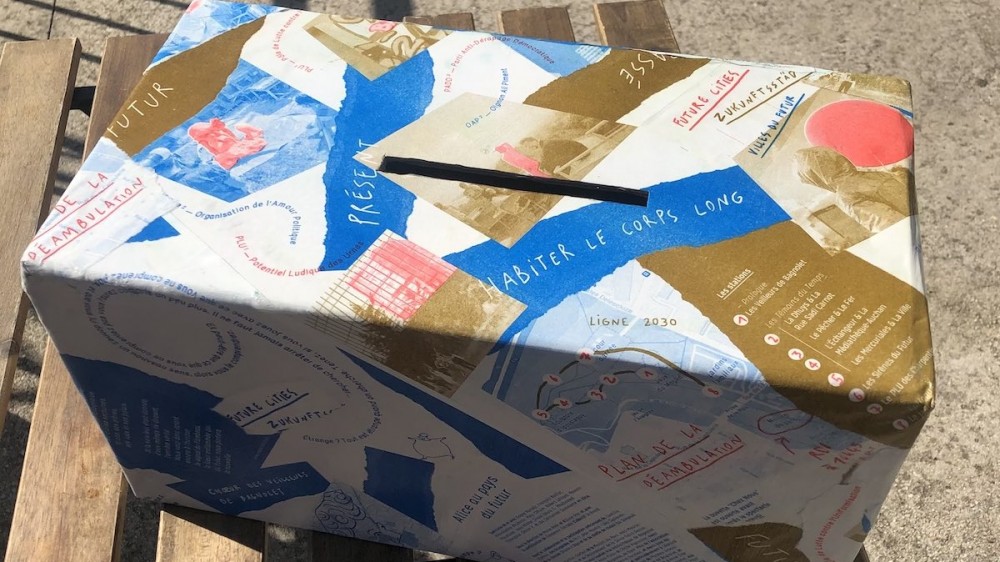 Two weeks later, it was Nuremberg’s turn! The STADT-Ensemble guided through the city centre with entertaining performances and surprising interventions. 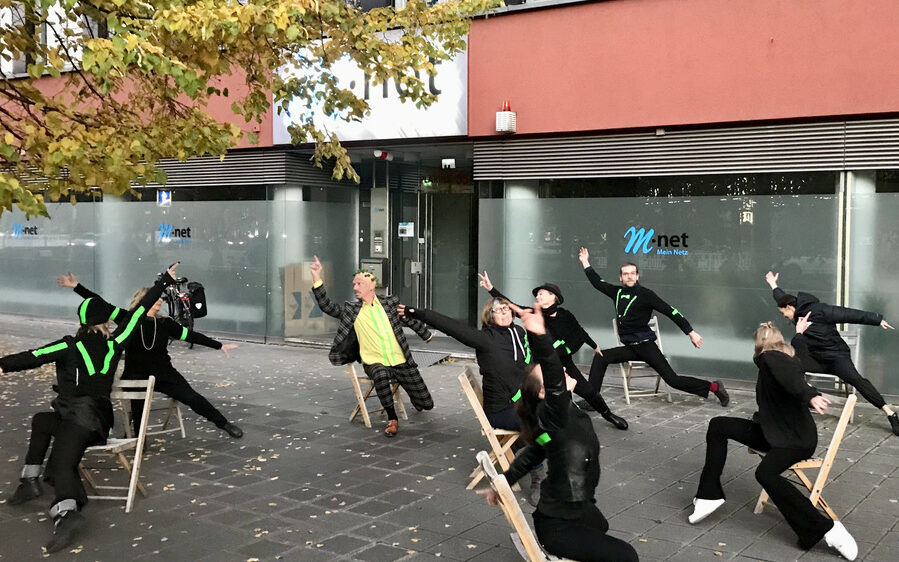 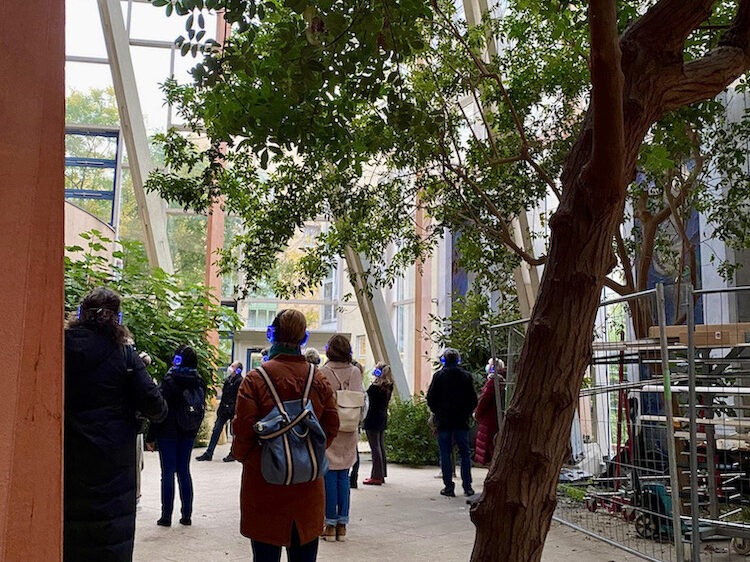 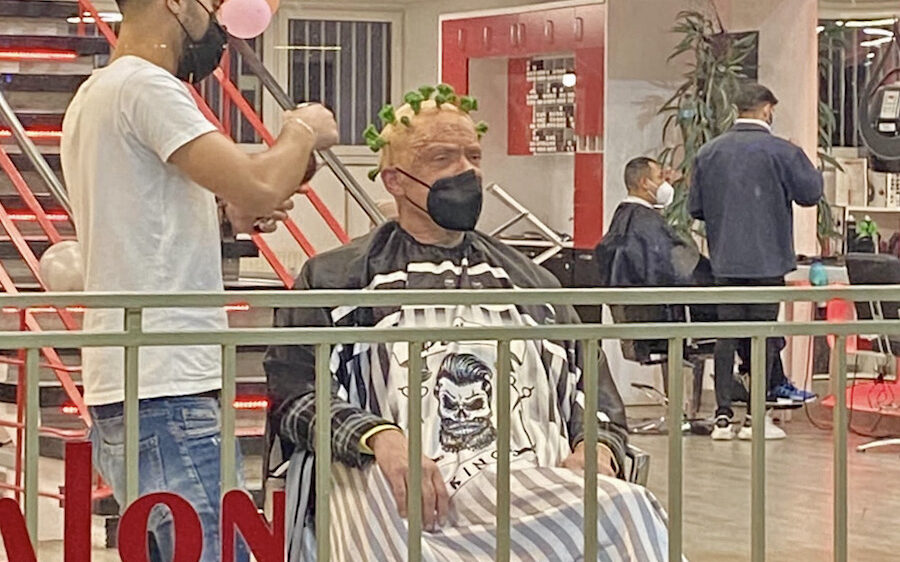 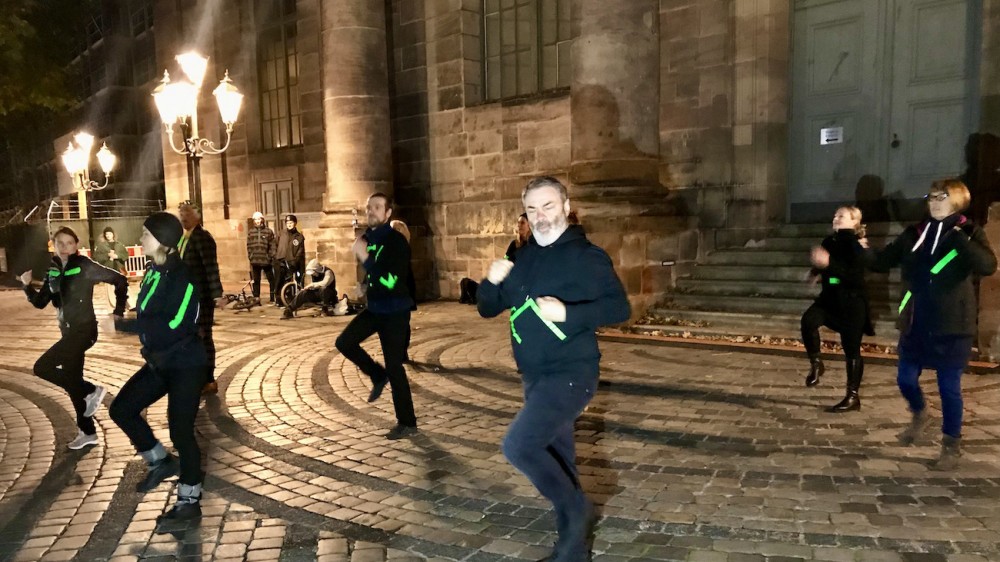 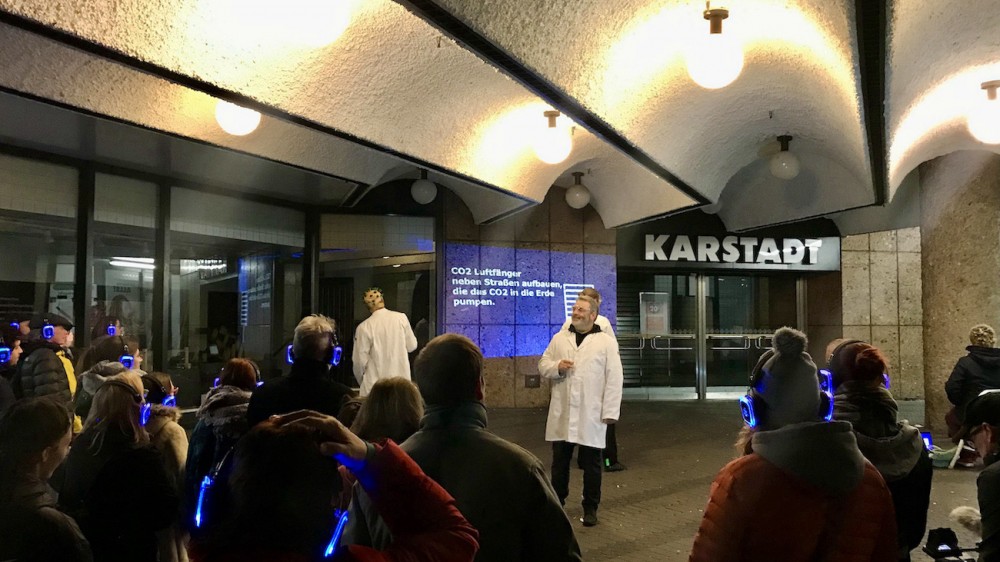 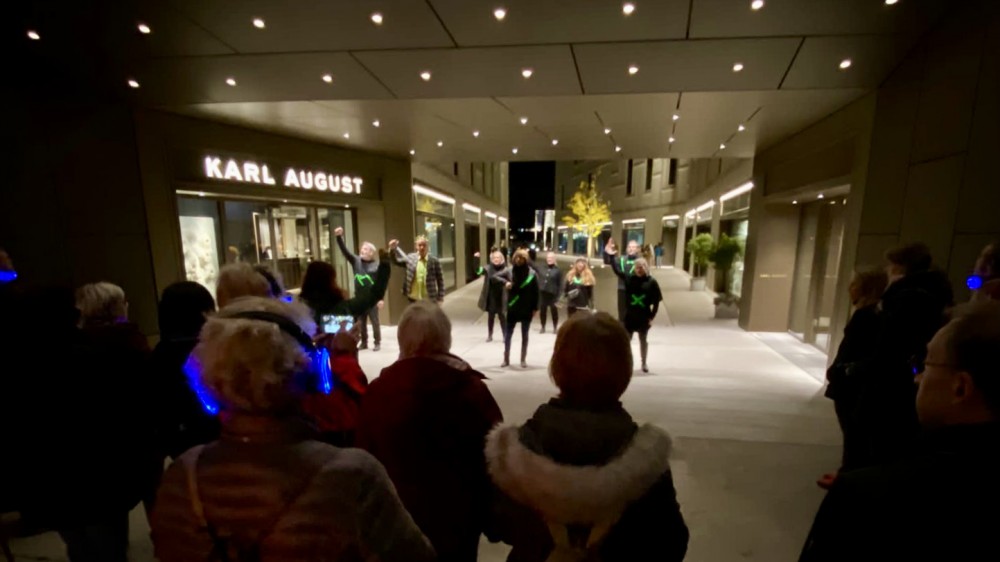 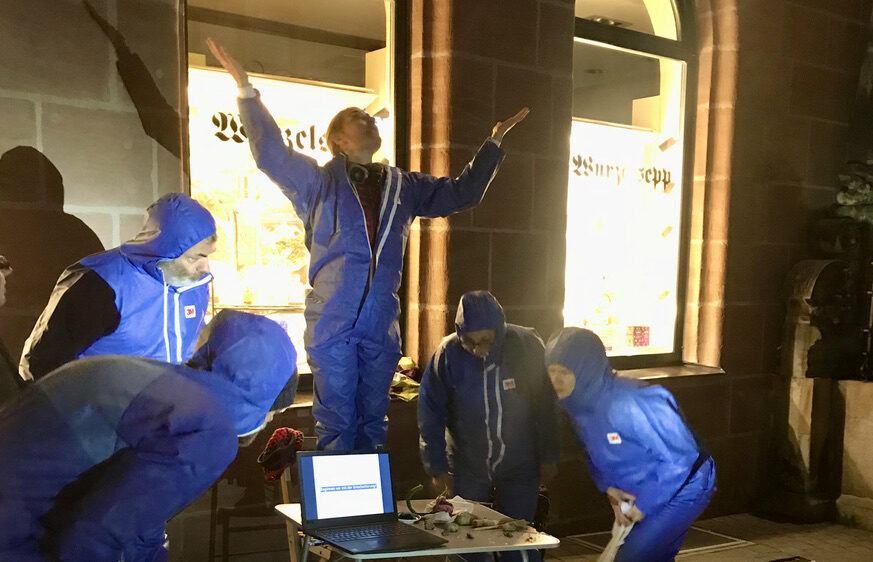 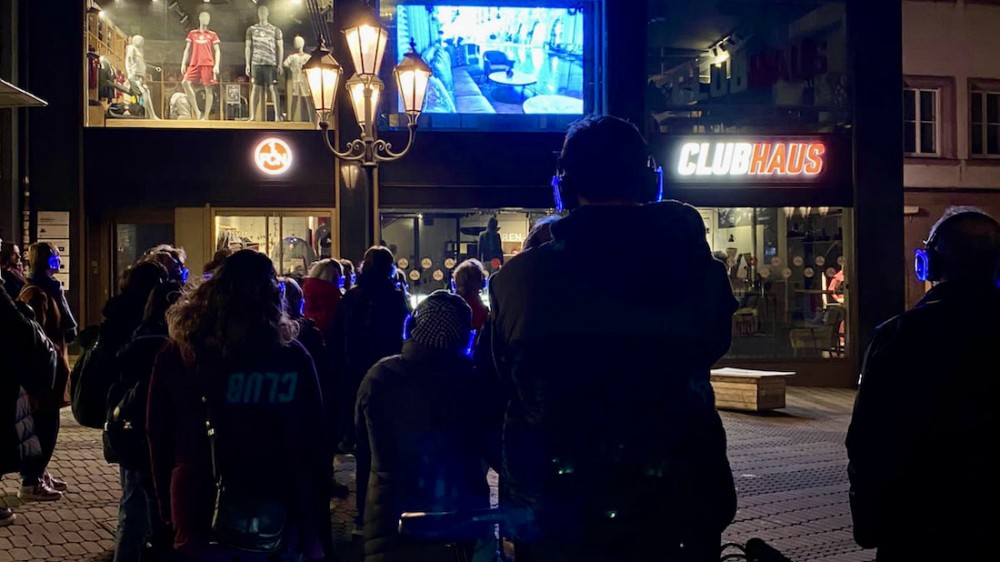 The city tours were accompanied by videographers to capture the performances themselves as well as the audiences and the surroundings. From this rich material we produced a film, which allows the local scenarios to grow beyond the cities of Nuremberg and Bagnolet!

At the end of October, we celebrated the grand finale! The participants of the two citizen theater groups, their artistic directors, Polis180 members, and the general public came together to watch the city tour videos and to enter into exchange about the personal, local, and European perspectives of the future scenarios that the two groups had created.

Right from the beginning, the individual involvement of the participants became clear. The city tours allowed them to sketch the future of their own city, in which some of them have lived for a long time, while others just moved there. They live in different neighborhoods, some like it, some not, so positive visions are all the more important. People from all ages were represented in the groups, from 10 to 80 years! Thus, different perspectives and ideas met, but also friendships were made. The future of their city concerns them all, which is why at the beginning of the French city tour everyone shouted out: “Bagnolet, c’est moi!”

Before the rehearsals began, the groups were already involved in the conception; the creative process was as important as the final performance. The participants could contribute their own visions by writing texts, alone or in small groups, so they got used to thinking, speaking, and acting from the perspective of a future person. In Nuremberg, dance elements helped to physically sense what it means to be in the future. In Bagnolet, the artistic means of personification was used to make places or objects speak. Then, for example, a street had its say and told about its everyday life. It was clear to the audience: We are all living in 2030 now!

On the local level, it became clear how much the scenarios were tailored to the two cities, their history and people. In Bagnolet, the tour took place in Parc Jean-Moulin, which is located above the city. Bagnolet was thus permanently visible on the horizon, also its future? Already during the rehearsals, the French group met many people there; they got into conversation, exchanged ideas, and looked into the future together. Particularly important were social questions, such as living in the community, workplaces, and housing issues. Finally, many people came to participate in the city tour, which also attracted attention among the other park visitors and thus reached a great audience in the public space.

In Nuremberg, environmental issues were a major topic. The participants presented their ideas for the mobility of the future, centering around the bicycle, urban greening, waterways to cool the city in view of rising temperatures, and sustainable nutrition. A hybrid creature was presented, half human, half plant, who lives completely CO2-neutral! The 14 stations of the tour were connected by an audio guide, narrated by an artificial intelligence called Noris A. Maybe she knows the best answers to our questions?

From a European perspective, the exchange during the onboarding and the closing event was particularly significant. While the city tours themselves focused on local scenarios and on questions that are particularly relevant to the respective city, the joint meetings made it possible to look beyond local horizons and engage with the wishes, hopes or fears of people from a different country. There were of course unifying themes, for example the focus on social and environmental issues. Everyone also agreed that community plays a big role in facing the future, which is why they enjoyed the opportunity to create visions together and to present them to the general public: in their own city as well as in the “European space” of the joint online meetings – l’Europe, c’est nous! Europa sind wir! Europe is us!

Collectiv Sirènes is an interdisciplinary collective that works in the field of arts and urbanism. It consists of artistic director Marie Roth, urbanist and architect Clémence Estrada, as well as dancer and choreographer Elise Roy. They will work with citizens of different age groups from Bagnolet, who will first exchange their own ideas about the future and will then be introduced to the artistic means of expression: dance and physical theater, text, and choruses. This is followed by the design of fictional figures of the future, who will come into action in a performative city tour – with choral and individual elements – at several stations in the urban space.

Tafelhalle Nürnberg is Germany’s only municipal production center for the independent scene in the field of music, dance, and theater. In 2019, the STADT-Ensemble was founded, which invites citizens to participate in artistic processes. The directors are choreographer and dance teacher Beate Höhn, director and theater teacher Stefanie Miller, as well as choreographer Sebastian Eilers. Their starting point will be an individual collection of future topics, which will then be discussed and further explored in discursive formats, improvisations, and walks to develop visions of the future. These will come together in a performative city tour, which will also invite local audiences to participate and share their ideas.

This project is funded by