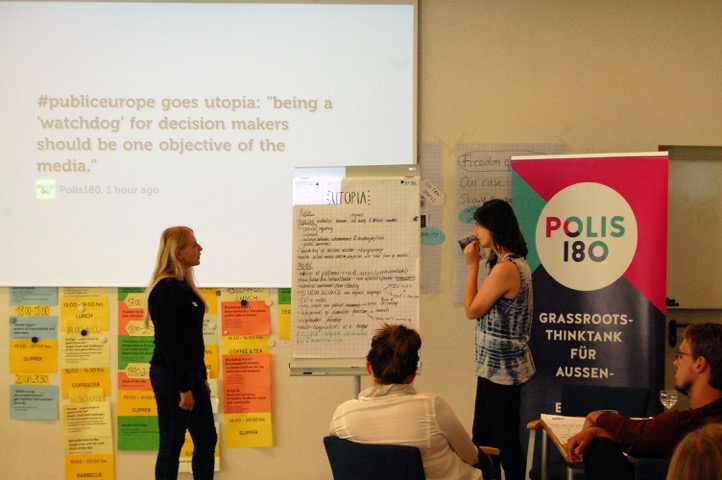 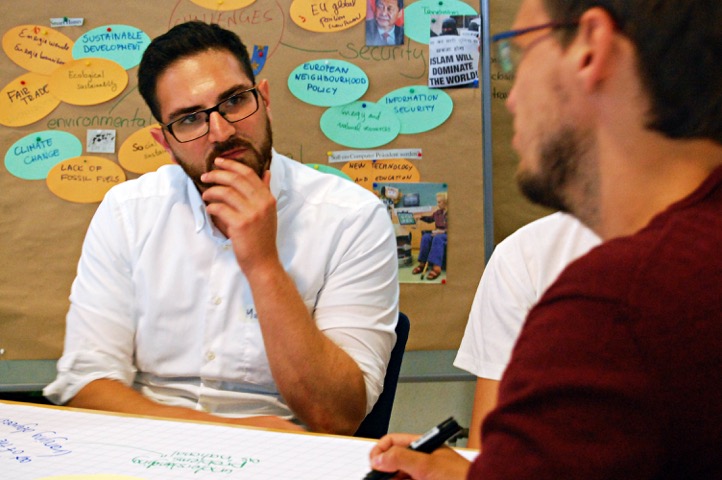 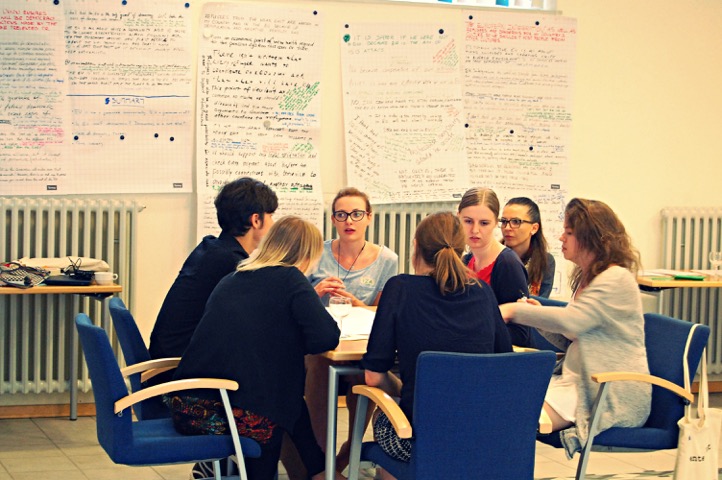 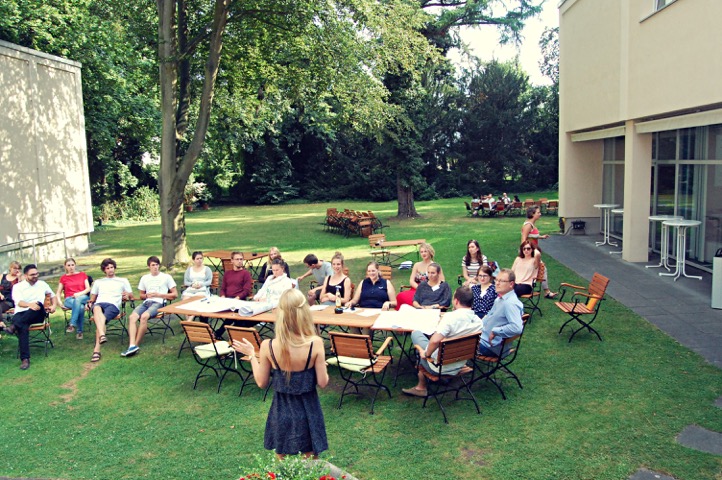 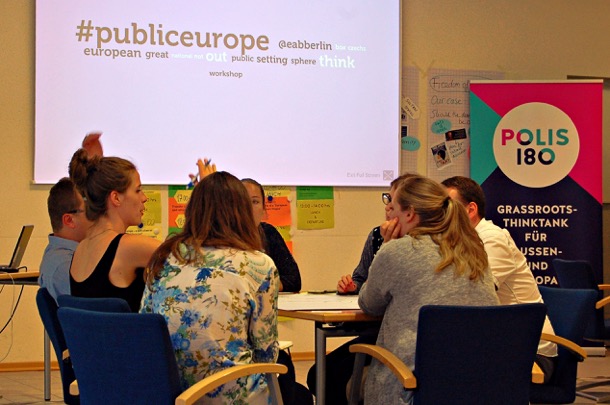 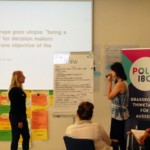 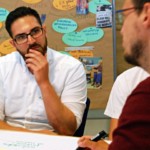 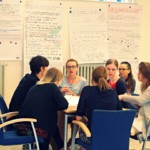 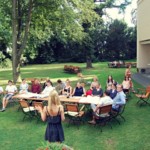 Dr. Weronika Priesmeyer-Tkocz, programme director at the European Academy Berlin e.V: “The workshop with the grassroots think tank Polis180 gave the participants of ‘enter:trust’ the opportunity to sum up the results of the previous seminar days and to give them another possibility to think out of the box. The workshop was outlined so as to not only debate from a Czech, German or Polish perspective, but from the perspective of a truly European young generation – and which will be responsible for Europe’s future.”

During this week of seminars, the participants discussed and analysed German-Polish-Czech relationships, current European challenges, but also common stereotypes about each other. The different seminar formats, including workshops and group discussion as well as innovative debating methods created an interactive and participative atmosphere.

Dr. Weronika Priesmeyer-Tkocz, programme director at the European Academy Berlin e.V. on the idea behind ‘enter:trust’: “At the European Academy, we regularly organise bilateral seminars, both German-Polish as well as German-Czech ones on current European topics, current challenges and possibilities of cooperation. However, we noticed that a trilateral perspective was missing: how are we as neighbours in central Europe thinking about questions of European integration and current challenges of the EU, as for example migration and asylum policy, security, energy, but also populism? As a consequence, the idea of ‘enter:trust’ was born. It aims at giving the younger generation an opportunity to discuss current European developments and exchange views with each other within a tri-national context. The focus here is to deal with different issues in a discursive way.”

During a one-day event, cut down in 3 workshops, we discussed challenges, utopias and policy recommendations towards a European public sphere with a group of 20 master and PhD students from Germany, Poland and the Czech Republic. The chosen ‘future lab’ format helped the participants to commonly reflect on the concept of a European public sphere and to discuss press freedom and freedom of expression.

IN DEPTH: THE IDEA BEHIND THE WORKSHOPS OF POLIS180

For instance, the young experts noted that the European Union is unable to create a direct connection to the personal life of its citizens, who in return do not identify with the EU. There is therefore no cross-national public debate; complex policy issues are predominantly seen through a national lense. Participants further asserted that when the EU makes headlines, it is mostly negative news. Additionally, they determined national politicians to play a crucial role in fostering thinking in ‘national boxes’, often using a lack of EU knowledge of their own citizens as well as the prominent absence of EU representation in the media to play the ‘EU blame game’. In addition, the media was identified not only as an essential element of a European public sphere but also as an ‘opinion-maker’, meaning that it gives citizens a voice, reflects local opinions and gives space to experts. However, as the participants noted, the media suffers from a lack of funding and citizens face an overload of information through different channels.

Objective information transmission was identified as a key prerequisite to a ‘utopian’ European public sphere. One group envisioned the EU as an easily accessible ‘customer service’, directly informing its citizens. Practically, a European newspaper could be shipped to the citizens’ post boxes for free. Others highlighted the responsibility of national politicians to inform their voters objectively about decisions taken at European summits. In addition, the public debate would encompass a greater European rather than a national perspective. This would require increased interest for and therefore deeper knowledge of the EU by its citizens. To provide that knowledge, participants urged different media actors to better fulfil their duties of supporting and nourishing a broad public debate with a strong focus on the EU through a European perspective.

In this phase, participants underlined the role of national and European politicians to highlight the political variety at the European level and to better cooperate together. The participants recommended to set up common candidates for European elections to be selected directly via a ‘second list’ across all Member States. If these nominations were transparent and competitive, they would tackle the EU’s often-debated democratic deficit and ensure that candidates are elected according to merit and expertise – undermining the claim that the EU is a small ‘elitist group’.

Thirdly, participants clearly put an emphasis on education. They suggested to put topics such as the political system of the EU and other European political issues on school curricula. Moreover, the majority of participants endorsed an expansion of programmes such as Erasmus, for instance starting at a high school level to reach more people.

As to the media, it was recognised as an essential factor for a European public sphere. Ideally, the media should balance an optimistic but realistic picture of the EU. Intra-European media could function as alternative information sources and a European media alliance could ‘translate’ between national and European editorial teams, diversify perspectives and broaden journalists’ networks.

Overall, this future lab and its three workshops were the source for insightful, fruitful and comprehensive discussions on various aspects of the European public sphere. On the one hand, participants came up with ideas on how to tackle the obstacles remaining in the way of a European sphere. On the other hand, they also formulated precise policy recommendations for the different stakeholders engaged in this sphere.

All in all, the workshop underlined the extensive communication deficit between the EU and its citizens. Also, it emphasised the need for more education about European issues and better information on a daily basis.