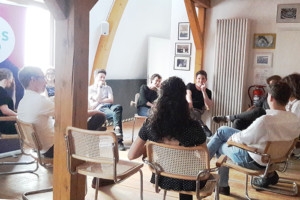 On 5 June 2018, Polis180 organised a storytelling workshop within the framework of the Civil Society Exchange program, which encourages CSOs to strengthen their capacities through mutual learning. The aim of Polis and Yereliz (our partner organization from Istanbul) and our German-Turkish capacity building partnership is to enhance our competences in the field of lobbying and advocacy, focusing on storytelling as a tool in policy and politics. Thereby, we want to understand how storytelling is used by policy-makers and how we can use storytelling ourselves to fight for the causes we deem important.

In order to get a comprehensive understanding, the workshop was guided by an expert in storytelling and performing, Chris Rogers, who offers a variety of workshops and trainings for business, political and educational institutions. At the workshop, Chris explained the main features of good storytelling, described the story-shaping process, gave useful insider tips and shared exemplary stories with the participants.

“Build hospitality between the storyteller and the listener” – this sounds simple, but it’s not always an easy task! Chris strongly emphasized that trust-building is the starting point, but also the main criterion for successful storytelling. As the process of storytelling deals with three major components – a story (I), which is being captured by a teller (II), in order to get connected to the audience (III) – it is essential to have strong, trust-based-links between these components. Trust can be established by means of body language, in particular through eye contact, which allows the teller to promptly recognise whether your listeners are following or there is a need for further clarifications. “Be honest and make your audience understand what you want to say!”

“Contrast, not conflict” – Commonly, stories are structured according to the so-called ‘story mountain.’ Hereby, the arc of suspense rises towards the climax of the story, and afterwards descends down the other side of the ‘mountain’ towards the resolution. Usually, the climax of a story is based on a conflict or problem, which often creates a sense of Good vs. Bad. Instead of following this largely divisive strategy for building up suspense, Chris suggested an alternative: the so called contrast-based approach that is widely used in Eastern Asian countries. He introduced the participants of the workshop to the “Ki-shō-ten-ketsu” narrative structure method, which originally derives from Chinese poetry and consists of four stages: 1. introduction (Ki) – setting up background information, 2. development (shō) – enriching and widening the picture of, 3. twist (ten) – bringing unexpected contrast into the storyline, 4. conclusion (ketsu) – proposing a resolution of the situation. Using this approach allows the storyteller to create a compelling narrative without creating clashes of narratives.  As Chris argued, “contrast brings tolerance; conflict brings the Right and the Wrong.”

Responsibility of storytelling: an opportunity for manipulation? Last but not least, the group discussed possible misuses of storytelling. Chris Rogers admitted that most poetic stories and tales are fictional. At the same time, they have a core of truth. According to Chris, the art of storytelling is to convey a message that carries emotions and should be used for good causes. Little surprisingly, this ‘appeal to emotions’ can, however, also be abused to conceal the truth – which happens regularly in business and politics. Overall, Chris stressed time and again that a key principle to keep in mind is to “be a mirror, not a lamp” – that is, to design stories in such a way as to allow listeners of the story to draw their own conclusions instead of providing pre-determined interpretations.

Following this thoughtful input by Chris Rogers, the last part of the workshop was dedicated to more practical aspects. In particular, we discussed whether, how and in which way storytelling could be used by Polis180 in order to communicate messages to our target audiences and to build trust among our members. Taking a normative stance, Chris emphasized again that “a lamp may cast light upon a person but only a mirror reflects truth”, meaning that the storyteller should leave enough room for the listeners to make their own interpretations. With these inspiring thoughts, Chris left room for reflection for the participants of the workshop as well as for Polis180 as a whole. 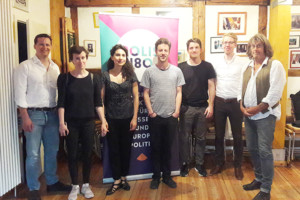